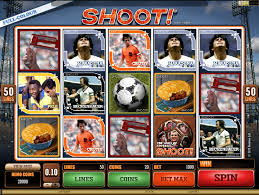 Shoot is online video slot game with a football theme. Powered by Microgaming, the theme of this this slot game is based on the football magazine that became famous in the 1970’s and 1980’s. Arguably the most popular football magazine in the UK, the weekly magazine regularly featured articles on the world’s best football players and their role in the sport.

This slot game brings back all famous faces featured in the magazine in high quality graphics and top-notch animation. The backdrop to the game is a soccer stadium where all the action takes place. The sound effects and background music all work together to produce a sport themed slot that is perfect for all soccer fans.

The slot machine in Shoot is based on Microgaming’s standard slot setup of 5-reels and 50 paylines. The game itself is packed with entertaining bonus features including wild symbols, scatter symbols, free spins and two additional bonus games. On the reels, players will find images of classic football legends including Maradona, Cryuff, Pele and Beckenbauer. Fans of the magazine will recognise many of the playing cards as well as spreads on the players themselves, images of the fans and classic logos.

Magazine and Free Spin Bonus Round

In the magazine bonus round in Shoot, players are presented with 12 magazines to pick from. There are two red cards hiding in the set of magazines that can end the bonus game at any time. The other ten magazines hide instant coin prizes that get added to the player’s total. On any pick a player can either pick a cash bonus or find a red card and end the bonus round. In the free spin bonus round, players can win from 10 up to 35 free spins. In the free spin bonus round, all wins are doubled, giving players a chance to rack up some decent payouts.